Branded as the “King of Valentine’s Day,” soulful balladeer John Legend will be out on the road to spread Valentine's love all summer long by embarking on his "Bigger Love Tour". No other artist could pull this off, save for John Legend who is People magazine's reigning "Sexiest Man Alive". Love will definitely be on the air as John Legend hits the stage of the Verizon Theatre at Grand Prairie on Wednesday 12th August 2020. Save room for the voice, the man, the legend as he gives his all in this one-night-only affair. Here's a quickie way — click that 'get tickets' link on this site so you and your friends could get your hands on those hot tickets. Get 'em right here, right now! 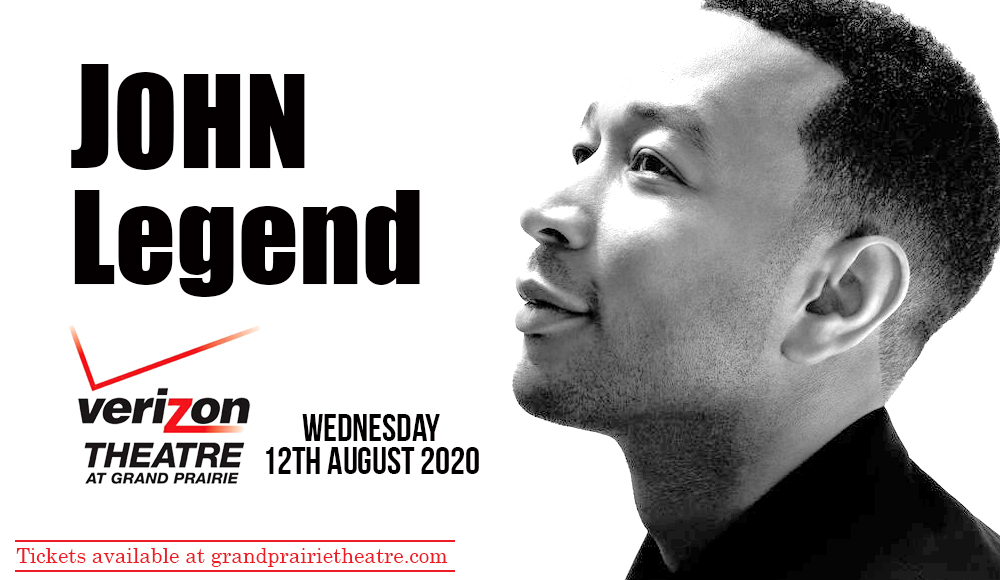 Singer-songwriter, piano player, music producer, actor, and philanthropist. All his prodigious talent, skills, and credentials truly live up to his name — John Legend. He has enthralled audiences the world over, not only with his chart-topping hits, but with his passionate singing, his emotive lyrics with melodies capable of tugging one's heartstrings; but with his magnetic charisma as well He is People magazine's reigning "Sexiest Man Alive", and recognized by Time magazine as part of their list of top 100 most influential people.

John Legend is known as a solo singer, but he has collaborated with established artists. Legend has sung on Jay-Z's "Encore", Alicia Keys's "You Don't Know My Name", Dilated Peoples' "This Way", Slum Village's "Selfish", Fort Minor's "High Road", and played piano on Lauryn Hill's "Everything Is Everything".

John Legend's famed personality is sometimes eclipsed by his hit single "All of Me" from his fourth studio album Love in the Future (2013), and was a Billboard Hot 100 number-one hit.

John’s debut album, "Get Lifted", collected eight Grammy nominations; won Best New Artist, Best R&B album and Best Male R&B Vocal Performance for Ordinary People, while on the other side of the spectrum, this same album has been selling more than three million copies worldwide.

His concert set-list is a formidable line-up of songs that will keep you singing along, all night long —"All of Me," "A Good Night," "Love Me Now," "Penthouse Floor," "Ordinary People", P.D.A. (We Just Don't Care) and "Green Light." His covers line-up of popular songs includes "What's Going On" by Marvin Gaye and "God Only Knows" by The Beach Boys.

In the Time 100 tribute to John Legend, another Legendary music man, Quincy Jones explained “He is a genius…and we’ve seen only the tip of the iceberg. For all that he has already achieved in his career, it is going to be fun watching where he goes from here.”

John Legend is a must-see! Book your tickets now!