Fantastic times are up ahead as super talented singer Fantasia Barrino headlines "The Sketchbook Tour", featuring guest performances by Robin Thicke, Tank & The Bonfyre. This powerhouse R&B team-up will be trekking 29 cities around the country. Get to see her perform track hits such as “When I See U,” “Without Me,” “Free Yourself,” plus new tracks from her seventh album, “Sketchbook.” Experience a truly fierce performance. Fantasia is one artist who can easily generate a full house. Fantasia, Robin Thicke, Tank & The Bonfyre will conquer the live stage of the Verizon Theatre at Grand Prairie on Thursday 14th November 2019. Act fast, book your tickets now! 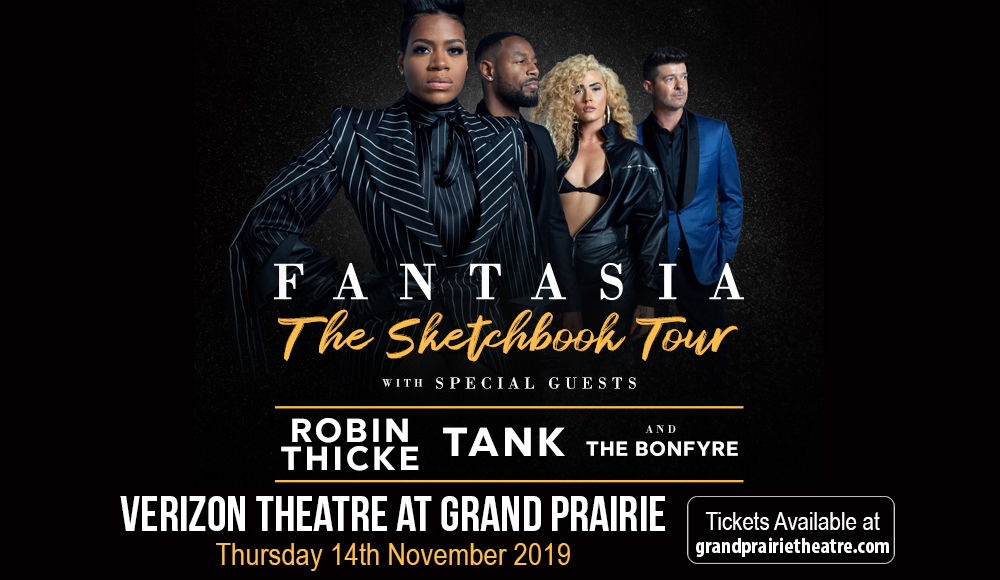 Fantasia Barrino is best remembered for her phenomenal win in Season 3 of American Idol. Yet she truly made her mark as fierce and consummate artist who can tackle everything from pop, R&B, Dance Pop, hip pop, neo soul, new jack swing, quiet storm, urban contemporary, deep pop r&b, Soul and Blues, and to Broadway musical artist. Fresh from her idol win, Fantasia released her debut single, "I Believe," which debuted at number one on the Billboard Hot 100. Her debut album, Free Yourself, was certified Platinum and earned Barrino three Grammy nominations in 2006. One of her most successful singles was "Bittersweet," which peaked in the top ten on the R&B chart. The single won her a Grammy for Best Female R&B Vocal Performance. As of February 2012, Barrino has sold 2,842,000 albums and 1,425,000 tracks in the United States. In 2012, VH1 ranked her number 32 out of the 100 Greatest Women in Music.

Swinging on to her current album "Sketchbook', Fantasia heads out for a tour, which Fantasia excitedly exclaims:

“I’ve been blessed to perform all over the world and have never been as excited & hungry to hit the stage as I am for this tour! The stage is my sacred place and where I feel most connected with people through my music. This tour is sure to be one that’s full of great surprises, incredible energy, and an absolutely great time for everyone who is able to come party with Rock Soul in the city nearest you.”

"The Sketchbook tour" includes a fantastic guest line-up featuring R&B's most exciting artists: Robin Thicke, Tank & The Bonfyre. Tickets are moving fast, so you've got to get one for yourself — lightning fast!