Tom Segura is one of the US’ most consistently funny comedians, using his deadpan delivery and guy-next-door vibes to lull the crowd into a false sense of security before delivering punchlines that zing and shock like no-one else! He’ll be heading to Verizon Theatre at Grand Prairie on Saturday 29th January 2022 on his I'm Coming Everywhere Tour, so get ready to laugh your butt off! There won't be a dry seat in the house! 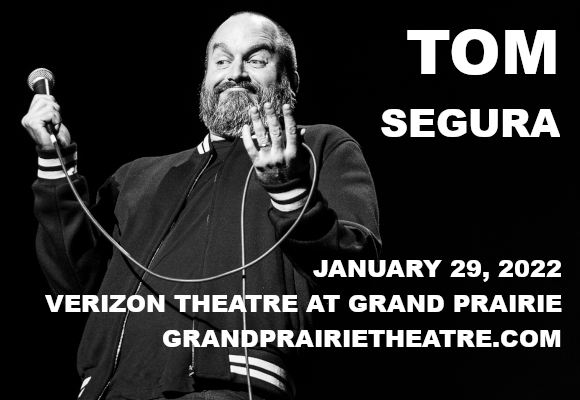 Since first stepping out into the world of comedy in the early-2000s, Tom Segura has fast become a huge name in stand-up, bagging himself a deal with Netflix that has resulted in four hilarious specials: Completely Normal (2014), Mostly Stories (2016), Disgraceful (2018), and Ballhog (2020). After moving to California to pursue a career once he’d left university, Segura became a regional finalist on season two of NBC’s Last Comic Standing, and just three years later had his first television feature on Live at Gotham. He has released two comedy albums – Thrilled (2010) and White Girls with Cornrows (2012) – and had a Comedy Central Presents feature in 2011. Also in 2011, he started the podcast Your Mom’s House with his wife, Christina Pazsitzky. Segura also hosts the podcast 2 Bears, 1 Cave (with fellow comedian and actor Bert Kreischer) and the Spanish-language podcast Tom Segura en Español. He has performed around the world at Melbourne International Comedy Festival, The Comedy Festival, the Global Comedy Festival in Vancouver, and Just For Laughs Comedy Festival.