Texas celebrates pride a little early in 2022 with Todrick Hall, and his Femuline Tour coming to Verizon Theatre at Grand Prairie on Saturday, March 26th, 2022. Grab your tickets, and let's all come out the closet for one heck of a fun night out with Todrick Hall, he’s got the voice, he’s got the moves, and he’s got the sexy boots to pull it off… This show is going to be big, bold and unapologetically LGBTQ! He's part old-school theater showman, part new-school internet personality, and one very huge part drag queen. 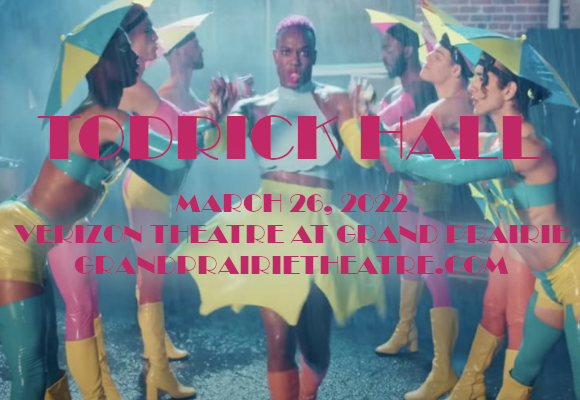 Multi-talented singer, rapper, actor, director, choreographer, and social media personality, Todrick Hall, first rose to fame during his appearance on the ninth season of American Idol. Todrick is the resident choreographer and occasional judge on RuPaul's Drag Race, and makes regular appearances on the BBC’s The Greatest Dancer. His popular YouTube channel has over 3.5 million subscribers and 740 million channel views. As a Broadway star he has had successful runs in Chicago, The Color Purple, Kinky Boots, Memphis, and Waitress. With sold-out tours of “Straight Outta Oz”, “Forbidden”, and “Haus Party”; and won the 2019 “Video for Good” VMA as co-executive producer on Taylor Swift’s LGBTQ+ anthem “You Need to Calm Down”.

As a singer-songwriter he has released four studio albums, including the visual albums, Straight Outta Oz, in 2016, and, Forbidden, in 2018. In 2020, he released an EP titled, Quarantine Queen. Hall released his fourth studio album, Femuline, in June 2021, the album was preceded by the singles "Boys in the Ocean" and "Rainin' Fellas", and is inspired by gay pride. It features appearances from Chaka Khan, Tyra Banks, Brandy, Nicole Scherzinger and Ts Madison.