Tiny Meat Gang, aka Cody Ko & Noel Miller, are bringing the Global Domination Tour to Verizon Theatre at Grand Prairie on Sunday 1st August 2021! Signed this year to Arista Records, the duo (who also host the award-winning Tiny Meat Gang Podcast and the YouTube show That's Cringe) have released three singles this year – "Walk Man," "Short Kings Anthem," and "Club Poor" – and they're bringing fans much, much more for this road show!

"TMG is back with an absurd new comedy show featuring new music, jokes and sketches guaranteed to make you fart with laughter. Come check out the biggest show by the two most medium sized guys in the biz." 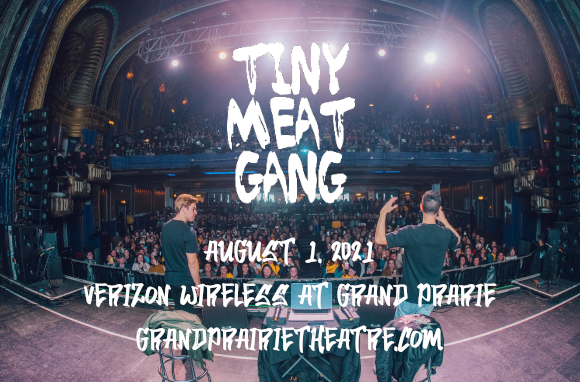 Tiny Meat Gang are also known as the comedy duo Cody Ko and Noel Miller, who have been performing and creating together in a variety of ways since 2016, when they began collaborating on each other's respective YouTube channels. Originally borne from a reaction to Jake Paul's song "It's Everyday Bro," the two began performing comedy rap under the name Tiny Meat Gang in 2017, and that year they also started the Tiny Meat Gang Podcast, which won best podcast at The Shorty Awards in 2019. 2017 also saw the release of their debut EP, Bangers and Ass, and in 2018 they released the EP Locals Only. The duo also host the YouTube channel That's Cringe.