Country-rock five-piece Old Dominion comes to Verizon Theatre at Grand Prairie on Saturday 16th November 2019 on their first ever headlining tour! The Make It Sweet Tour, named after their 2018 hit, sees the group performing songs from their first two albums, plus brand new material from their upcoming third LP! They'll be joined in support by Scotty McCreery and Ryan Hurd! 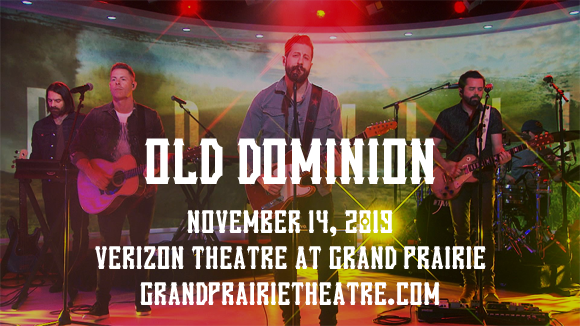 Old Dominion is an American country-rock band formed in 2007 in Nashville, Tennessee by five songwriters, who had originally made their living writing for a variety of high-profile artists, including Luke Bryan, Cole Swindell, Randy Houser, Kenny Chesney, Kelsea Ballerini, Blake Shelton and Dierks Bentley, among others. The group released its eponymous debut EP in 2014 to critical acclaim. Their debut album, Meat and Candy, followed in 2015, launching the singles "Break Up with Him", "Snapback", and "Song for Another Time". In 2017, the band released second and most recent studio album, Happy Endings, and in 018, the group won the ACM Award for Vocal Group of the Year – their second ACM Award to date, having won the award for New Vocal Duo or Group of the Year in 2016.