Pink Floyd drummer and co-founder Nick Mason formed a Pink Floyd tribute band called Nick Mason's Saucerful of Secrets, and they'd be out on tour in 2022… Now, how cool is that! That's two strokes of luck for every Pink Floyd fan out there, so catch a doubly fun and exciting concert event as Nick Mason's Saucerful of Secrets seizes the stage of the Verizon Theatre at Grand Prairie on Saturday 12th February 2022. Dubbed as the "Echoes Tour", Nick Mason is flanked by an all-legends line up which includes bassist Guy Pratt, guitarists Gary Kemp of Spandau Ballet, and Lee Harris from Ian Dury’s Blockheads and keyboardist Dom Beken. Fans were raring and ready to pounce at the chance to book tickets to the show. Get yours now with a few easy clicks starting on that 'Get Tickets' link on this site. Lock it in, book your tickets now! 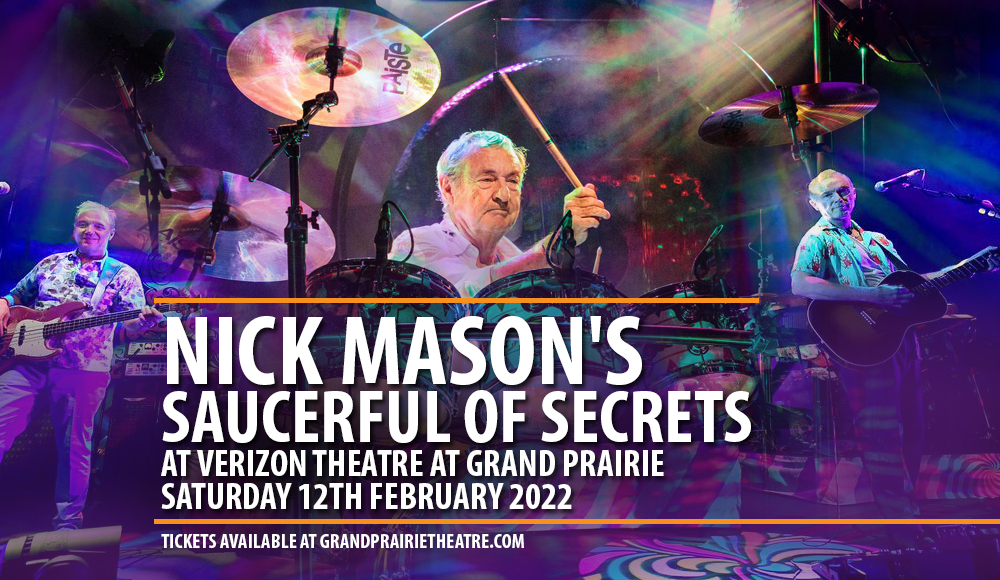 Pink Floyd is undeniably one of the most influential rock bands of all time. Hence, it's no surprise that numerous bands come together for a reason to pay homage to their music. But when a Pink Floyd drummer and co-founder forms his own Pink Floyd-tribute band, then it takes the musical experience to a whole new level. Nick Mason's Saucerful of Secrets has a slightly different agenda. Instead of 'sounding alike, Nick wanted to "capture the spirit" of the music rather than recreate it. Instead of playing note-for-note renditions of their classic hits, Mason opted to unearth the band's experimental early years prior to the release of their iconic "Dark Side of the Moon" album released in 1973. Then he sought a little help from friends, namely, bassist Guy Pratt, guitarists Gary Kemp of Spandau Ballet, and Lee Harris from Ian Dury’s Blockheads, and keyboardist Dom Beken — names that are legends in their own right. Together, Nick Mason's Saucerful of Secrets officially went on tour, debuting in May 2018 at Dingwalls in London before embarking on a European tour in September 2018 and a North American tour in 2019.

“We enjoyed our 2019 tour in America so much,” Mason says in a statement. “We’re happy to be back at it and playing Pink Floyd music fans may have never had the chance to experience live.”

Nick Mason's Saucerful of Secrets is on a roll! A must for every Pink Floyd fan! Get your tickets now!