Four-time Grammy Award-nominated Christian rock band Newsboys will be performing at Verizon Theatre at Grand Prairie on Sunday 10th October 2021 (Rescheduled from Sunday 25th April 2021) as part of their extended Newsboys United Tour! The chart-topping, multi-platinum-selling group have gathered past and present members to create a Newsboys supergroup and they'll be playing for you live! Former frontman Peter Furler and bassist/vocalist Phil Joel will be joining Michael Tait, Duncan Phillips, Jeff Frankenstein and Jody Davis for a reunion show tha'll blow you away! 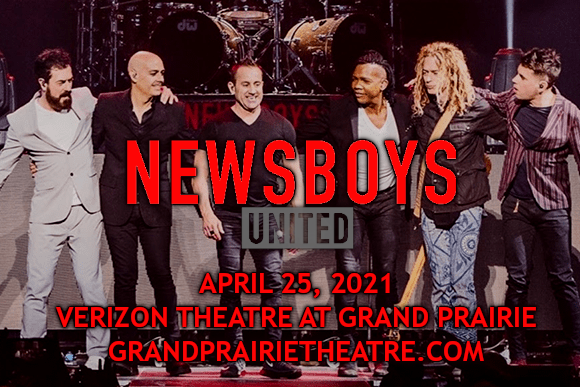 Christian rock band Newsboys formed in Mooloolaba, Queensland, Australia in 1985. The group was formed by lead vocalist Peter Furler with his school mate and guitarist George Perdikis, and originally went under the name News. Two years after the band formed, they moved to Nashville, Tennessee in the U.S. And changed their name to Newsboys to avoid confusion with Huey Lewis and the News. The group release its debut album, Read All About It, in 1988. Over the years, the band has released 17 studio albums, including six that have been certified gold, and over 30 number one singles on the Christian music charts. The band currently consists of lead vocalist Michael Tait (formerly of DC Talk), drummer and percussionist Duncan Phillips, keyboardist and bassist Jeff Frankenstein, and guitarist Jody Davis.