Experience all the joy and fun of your favorite show as you've never seen it before, as My Little Pony Live comes to Verizon Theatre at Grand Prairie on Tuesday 9th June 2020! Join "the Mane six" — Twilight Sparkle, Pinkie Pie, Rarity, Fluttershy, Applejack and Rainbow Dash — as well as their loyal friend Spike, the regal Princess Celestia, and many more beloved characters from Ponyville and beyond in this musical extravaganza that's fun for all ages! Every pony will love this exciting adventure, that's filled with songs, laughter and, of course, the magic of friendship! 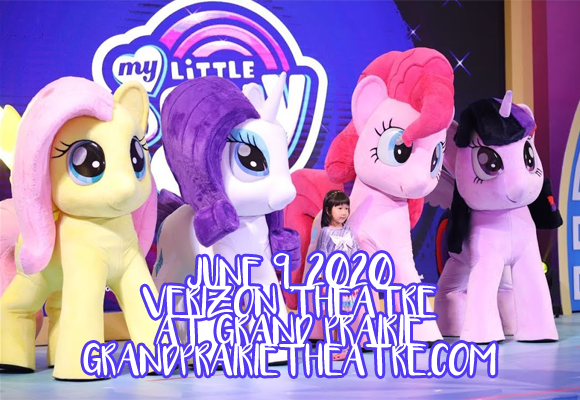 My Little Pony Live is an all-new musical stage show based on Hasbro's animated fantasy television series and cultural phenomenon, My Little Pony: Friendship is Magic. The show features ponies Twilight Sparkle, Pinkie Pie, Rarity, Fluttershy, Applejack and Rainbow Dash, as well as their dragon friend Spike, as they embark upon adventures and antics, whilst learning about the magic of friendship in the Equestrian town of Ponyville.