Larry The Cable Guy is bringing his new, laugh-a-minute stand-up tour to Verizon Theatre at Grand Prairie on Friday 17th May 2019, and he's gonna “Git-R-Done” in true Larry style! The Blue-Collar comedian, who also hits the road with classic rock band Styx this summer for an unlikely co-headlining tour, will be tickling your funny bones with previously unheard material, guaranteed to get you guffawing the whole way through! 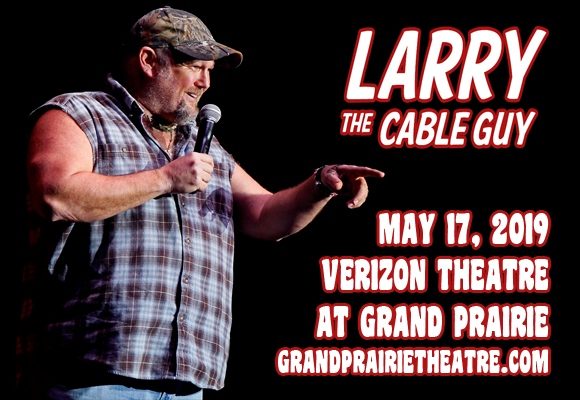 American stand-up comedian, actor, producer, country music artist and former member of the Blue Collar Comedy Tour (alongside Bill Engvall, Ron White, and Jeff Foxworthy), Larry the Cable Guy (the stage name of Daniel Whitney) began his career as a radio personality in the early 1990s. As a stand-up comedian, he has released seven comedy albums to date, three of which have been certified gold by the RIAA, and has starred in three Blue Collar Comedy Tour–related films, as well as in Larry the Cable Guy: Health Inspector, Delta Farce, and Witless Protection. Larry voices Mater in the Cars franchise and he starred in the series Only in America with Larry the Cable Guy on History from 2011 – 2013. Larry's catchphrase "Git-R-Done!" is also the title of his 2005 autobiography.