Columbian superstar singer and actor Carlos Vives comes to Verizon Theatre at Grand Prairie on Friday 21st January 2022 on his Después de todo… VIVES Tour! The performer will delight fans with a selection of songs from his multi-platinum-selling, Grammy Award-winning career that has spanned over thirty years!

"After everything we have been through, returning to North America, to so many beloved places, to see unforgettable friends and special audiences again, makes this truly a historic moment for me," the Colombian star said in the announcement for his tour. 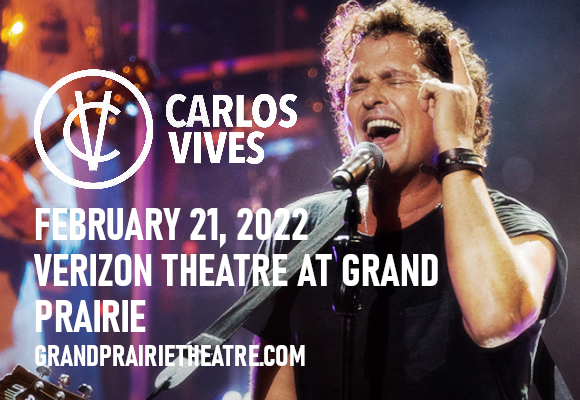 Columbian singer, songwriter and actor Carlos Vives began his career as a student, performing rock music in bars and cafés around Bogotá. He went into acting and throughout the 1980s he had roles in a number of shows and telenovelas, before finding fame in 1986 when he starred in the title role of Gallito Ramírez. That year, he also released his debut studio album, Por Fuera y Por Dentro. However, it was in 1991 that Vives’ life changed forever when he was offered the role of  vallenato composer Rafael Escalona in the fantasy series Escalona. He was hugely popular in the role and his music found national success when he released the Telenovela's two soundtrack albums Escalona: Un Canto a la Vida and Escalona: Vol. 2. Since his casting as Escalona, his career has gone from strength to strength both in acting and singing. To date, Vives has released thirteen studio albums, thirty singles and music videos. He has won two Grammy Awards out of five nominations and eleven Latin Grammy Awards from twenty two nominations.