It's a celebration of melanation as some of the funniest brothers and sisters around take to the stage at Verizon Theatre at Grand Prairie on Sunday 19th January 2020! Expect nothing but hilarity at Black Laughs Matter, featuring the comedic talents of Arnez J, Aries Spears, Tommy Davidson, Benji Brown & Carmen Brown! There'll be wall-to-wall giggles and guffaws as these engaging and witty acts take to the stage – get ready to be entertained! 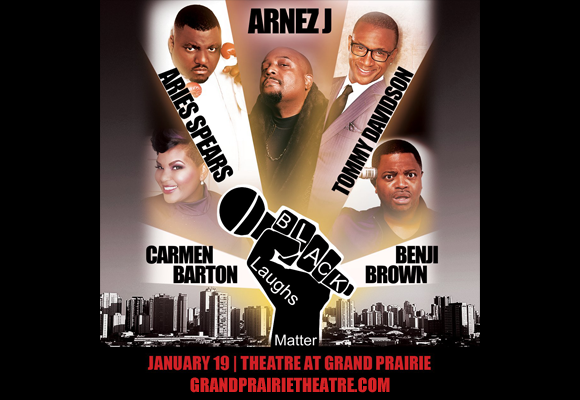 Arnez J has been a name on the comedy circuit since the early 1990s with his clean, energetic physical comedy. Host of BET's Comic View for two seasons, Arnez has also found small screen fame with his Netflix special, Racially Motivated.

New York comedian, actor and writer Aries Spears is best known for his on Fox's sketch comedy series MADtv, where he was the second longest-serving cast member on the show behind Michael McDonald. Spears is known for his accurate and hilarious celebrity impressions.

Comedian and actor Tommy Davidson rose to fame on the Fox sketch comedy show In Living Color. In the 1990s, several of Davidson's comedy specials were aired on Comedy Central, and he also landed acting roles in several comedy films, including Ace Ventura: When Nature Calls, Strictly Business, Booty Call and Juwanna Mann.