The original party boy, King of Good Times and now one of the world's top comedians, Bert Kreischer comes to Verizon Theatre at Grand Prairie on Saturday 4th December 2021 on the Berty Boy Tour! Kreischer is dynamic and charismatic stage presence that brings fun in abundance – an unpredictable wild card of a man who knows how to spread joy and trepidation in equal measure, The Machine is, well… a lot. So get ready to be overwhelmed by the unexpected as one of the most exhuberant and likeable guys in the whole of comedy does his thing! 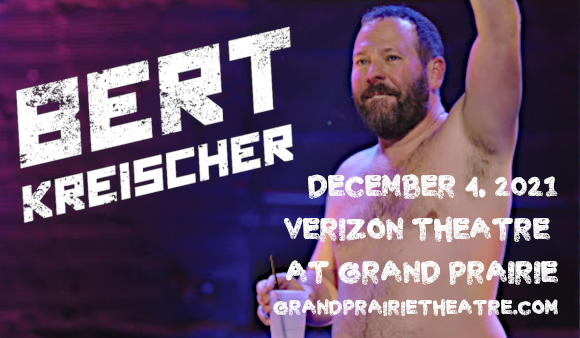 American stand-up comedian, reality television host and actor Bert Kreischer whose path to stand-up comedy has been an unusual one. In 1997, whilst in his sixth year at Florida State University, Kreischer was the subject of an article for Rolling Stone, who named him "the top partyer at the Number One Party School in the country." This, in turn, was the basis for the 2002 film National Lampoon's Van Wilder starring Ryan Reynolds. Whilst living in Florida, Kreischer began performing stand-up, and later relocated to New York to pursue it as a career. Over the years, he has hosted several television shows, including Hurt Bert on FX, and Bert the Conqueror and Trip Flip on Travel Channel. He also produces and hosts Bertcast, a weekly comedy podcast on the All Things Comedy network.