Country music maverick Aaron Lewis comes to Verizon Theatre at Grand Prairie on Thursday 7th October 2021 as part of his State I'm In Tour! The stridently political performer, who recently topped the country charts with his protest song "Am I the Only One," will be performing from his 2019 album, as well as delivering fans some brand new tunes! The uncompromising artist will be performing an acoustic set, peppered with stories and anecdotes, and will be supported by Trick Pony bassist Ira Dean! 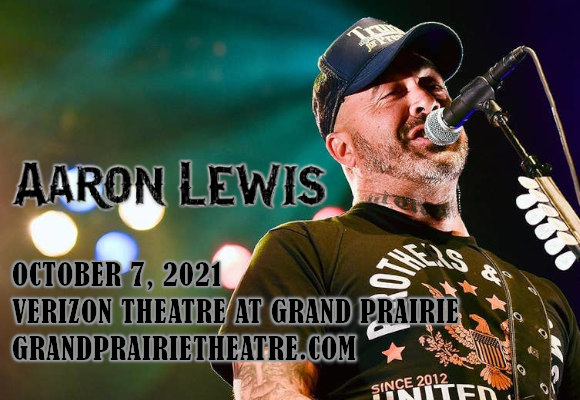 Having made a name for himself as the lead vocalist, rhythm guitarist and founding member of the rock band Staind, American singer, songwriter and musician Aaron Lewis began his solo career as a country artist in 2010. After Staind’s success as a nu-metal band, Lewis made the move to country in part because he had grown up listening to the genre, and in part because he was inspired while touring with Kid Rock. He released his debut solo EP, Town Line, in March 2011 and reached number seven on the Billboard 200, number three on both the Independent Albums and Top Rock Albums charts, and topped the Top Country Albums chart. The EP was followed by his debut solo album, The Road, in 2012. To date, in addition to his seven albums released with Staind, Lewis has released three solo studio albums. His most recent album is 2019’s State I’m In. In July 2021, he released the single "Am I the Only One," which debuted at number one on the Billboard Hot Country Songs chart and at number fourteen on the Billboard Hot 100 – his highest-charting release on both charts.