She raised you, fed you, taught you, and above all, love you. Now isn't it high time for you to give back and show your love? Give the most important woman in your life the gift of music to feed her soul… Go take her for a joy ride on a soul train of sweet music nostalgia. Your destination: "A Celebration For Mom" featuring Boyz II Men, Brian McKnight, Najee & Alex Bugnon at the Verizon Theatre at Grand Prairie on Sunday 8th May 2022. Give her that 'one sweet day' that she totally deserves as she sits back and reminisces with Boyz II Men's biggest hits like "I'll Make Love to You", "One Sweet Day", "It's So Hard to Say Goodbye to Yesterday", "Water Runs Dry", "End of The Road", and many more! Treat her like a queen as Brian McKnight serenades her with his best-loved hits like "Back At One", "One Last Cry", "Crazy Love", among many others. A happy mothers' day greet is good; but "A Celebration For Mom" is what she deserves. Book your tickets now! 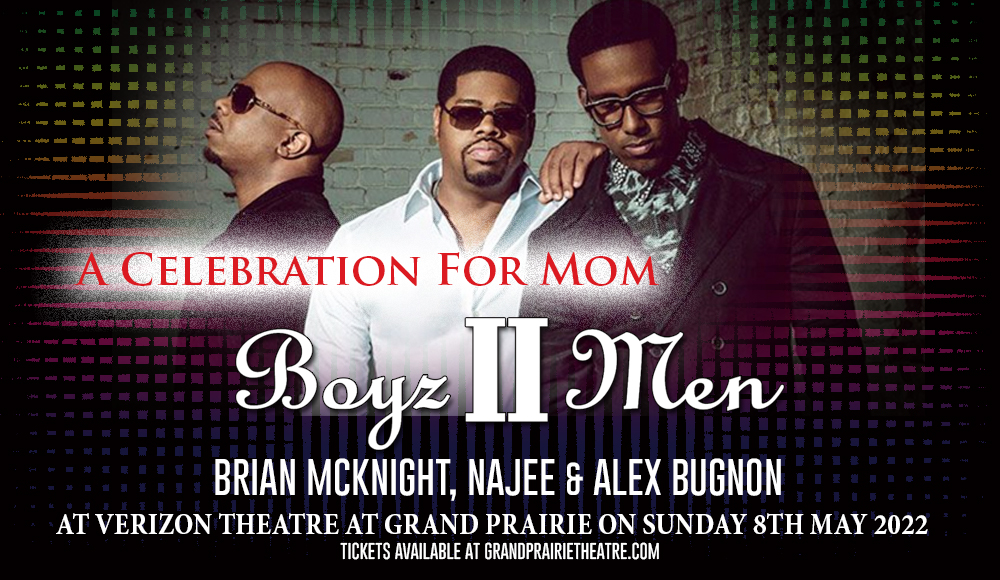 Boyz II Men set the bar high in the 90s as they lorded over the airwaves with their ultra-smooth blend of four-part harmonies, making a mark via their biggest hits "I'll Make Love to You", "One Sweet Day", "It's So Hard to Say Goodbye to Yesterday", "Water Runs Dry", "End of The Road", to name a few. "End of the Road" set a new record for its long-extended position at number one on the Billboard Hot 100 for thirteen weeks. Boyz II Men also broke their own record with the subsequent releases of "I'll Make Love to You" and "One Sweet Day" (with Mariah Carey), which, at fourteen and sixteen weeks, respectively, each set new records for the total number of weeks at number one. Boyz II Men was recognized as Billboard magazine's biggest boy band during the period of 1987 to 2012. They are now part of the elite circle of artists in terms of time spent at number one in Billboard history with 50 cumulative weeks, ranking sixth behind Drake, the Beatles, Rihanna, Elvis Presley and Carey. Their song "On Bended Knee" took the number one spot away from "I'll Make Love to You", Boyz II Men became only the third artists ever (after the Beatles and Presley) to replace themselves at the top of the Billboard Hot 100. And yes, they have four Grammy Awards, to boot!

Brian McKnight is an American singer, songwriter, actor, record producer, radio host, and multi-instrumentalist. His signature high belting range and smooth yet strong falsetto has brought him his signature hit songs"Back At One", "One Last Cry", "Crazy Love", and many more. McKnight has 16 Grammy Awards nominations and clinched the Outstanding Male Artist Award at the MTV Video Music Awards in 2000.

Make this year's mothers day truly special with "A Celebration For Mom", as Boyz II Men, Brian McKnight, Najee & Alex Bugnon hit the stage of the Verizon Theatre at Grand Prairie on Sunday 8th May 2022, to serenade moms with the most emotional and soul caressing RnB music. Get your tickets now!